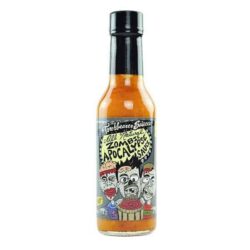 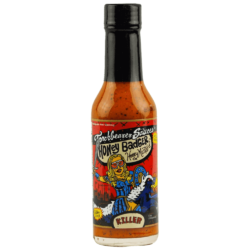 TorchBearer Sauces was founded by Vid, Ben, and Tim, three guys in their 20s with a knack for creating tasty condiments, fiery hot sauces, and tasty recipes with them. Besides creating a range of table sauces and enough recipes to fill a book, TorchBearer has also been turning heads with the world’s first habanero cheesecake. So how did TorchBearer start, you ask? Well, like many great inventions, the sauce itself started as a fluke. Vid and Ben just happened to have lots of extra habaneros in their gardens that they didn’t want to go to waste. As a result, they decided to create a habanero preserve. Little did they know that it ended up tasting better than anything on the market —so, naturally, they decided to share a good thing. The three guys took a few days off work, drove from Pennyslvania to Texas—and back (over 72 hours!)—and picked up 666 pounds of habanero peppers. They spent two weeks of chopping, bagging, and freezing the peppers so they’d have enough for the upcoming winter. It wasn’t long before they were making all the sauces themselves, by hand. Armed with temporary labels and their first full batch of sauce, it was now time to see if the world was ready. The guys went down to the Cajun Hot Sauce Festival in Louisiana and won three national awards with their sauces. More awards started coming and it wasn’t long before the word started getting out. The End. Okay, well not quite The End. The guys are still hitting the hot sauce festivals and coming up with new concoctions all the time.